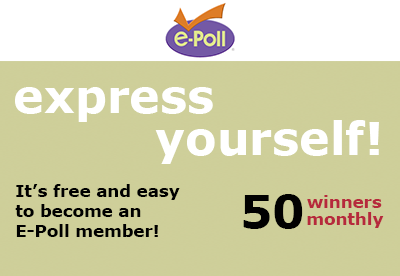 E-Poll provides a convenient online forum to express your opinions on a variety of issues that affect your daily life.

E-Poll's goal is to give members an effective tool to project their voice through interactive surveys. E-Poll provides the venue, the research expertise and the technology for you to share your thoughts with companies that provide products and services you use every day.

Sign up for E-Poll is quick, easy, and completely free. Members gain access to a convenient forum where they are able to express their opinions with some of the most well-known companies in entertainment and household products.

E-Poll members are sent email invitations to take surveys and they earn points for every survey they take. Point values vary depending on the length and type of survey. For example, a video survey that has many questions might be worth 1000 points, while a basic survey might be worth 200 points.

Earned point can be redeemed like cash to fund your PayPal account. Points can also be accumulated and redeemed for gift cards at major retailers like Best Buy, Starbucks, Walmart, GameStop, Amazon.com and more.

EPOLL
"E-Poll Review"
October 4, 2016 by Harren from US
E-Poll Research is a survey website I discovered some years ago, and to this day I am still a member of it. Surveys are sent to the inbox at random intervals, and they generally range from a few to several minutes, since they commonly ask you whether a particular famed personality/company/TV show is know to you or not. These reasons are why I like, and would recommend E-Poll:

1. Completion & Compensation guarantee: Every survey E-Poll sends can be guaranteed to be completed in a single sitting, and you are given the full amount of points stipulated on the email invitation.

2. Creatively-designed surveys: E-Poll surveys are pretty fun to take, since they commonly ask you whether you're familiar with celebrities, TV shows, movies, the like. My personal favorites are the surveys where I'm asked my opinions on fictional characters; I adore nothing more than sharing my opinions on these characters. I also like the surveys where I'm asked about TV shows, since they give me an opportunity to voice things I like/dislike about the shows.

3. Easy way to earn points: At the minimum, E-Poll pays 350 points per survey. Longer ones may pay 500 points, and there're some that pay 1000 points. It doesn't take too long to earn the number of points needed for the minimum award threshold (which is 3750 points).

Why I would advise against E-Poll:

1. Only one account per residential address: I have no idea why, but E-Poll has this rule that every residential address can have only one account tied to it. It's kind of draconic when you think about it, as it prevents several family members/cohabitants in a single household from sharing their opinions. I can only imagine the amount of valuable information that'll be left on the table due to this rule.

2. Random email sending: E-Poll does not have a set time of the day when surveys are sent; rather, they're just sent whenever. Also, these surveys have time limits (especially the ones where that is mentioned explicitly), meaning if you wait too long to take them, you forfeit the points. It also doesn't help that they don't give you advance warning that a survey is about to be sent your way, through text messaging, for one.

So, in conclusion, while E-Poll isn't as perfect as I'd want it to be, it's a site that's rewarded me richly since I joined it. Provided its cons don't deter you too much, make E-Poll one of the survey sites you sign up for.

EPOLL
"Don't know what happened...."
October 2, 2016 by Samantha from US
I am very frustrated with this website, the surveys were great at first but after I earned about $10 I couldn't get anywhere with them! Their email links just go to dead ends!

EPOLL
"Legitimate Survey Site"
October 2, 2016 by michelle from US
I like this one. You qualify for everything they send you. The surveys are generally about TV shows or actors so they are interesting and fun. You earn points which you can eventually cash in for a digital gift card.

EPOLL
"Consistent & Quality"
September 30, 2016 by David from US
ePoll is a survey company that offers you surveys that are based on television shows, movies and actors. It is a fun survey to take an average survey is 10-20 minutes long and you can earn 500-1,000 points per. I have seen anywhere from 2-3 surveys a month and they offer e-gift cards & PayPal. It is an easy redemption process and they are a company that you can trust. I highly recommend them if you are already doing surveys from other companies.

EPOLL
"Never disqualify"
September 29, 2016 by Ashley from US
ePoll never disqualifies you, so you can be sure when you take a survey that you'll get the points. Surveys come sometimes once or twice a day, sometimes a couple weeks apart. When you cash out (at least for PayPal which is all I ever do) it takes about a month to get paid. Overall it's great since the surveys are easy and relevant and it never fails to pay.