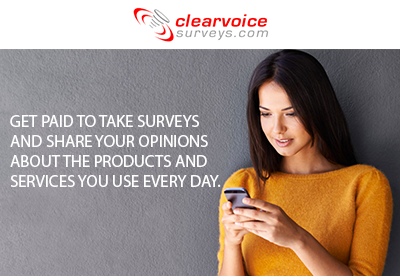 ClearVoice Surveys values the opinion of the general public. Members receive rewards for taking online surveys that influence the development of new products and services. They match users with fun and easy-to-complete surveys.

ClearVoice Surveys is operated by ClearVoice Research, a leading provider of market research and intelligence to corporate and non-profit clients in financial, healthcare, consumer product and b2b markets. They provide full service research (Quantitative and Qualitative) data collection, analysis, reporting, with conclusions and recommendations. They are experts at recruiting, building, and managing private and public research panels.

The purpose of the ClearVoice Survey website is to connect users with third party companies that have a need to collect opinions, reviews, and experiences on their products or products of their clients (the "Companies") and are willing to provide certain compensation for doing so (the "Rewards"). Members must be at least 13 years old. Signing up is simple and free with ClearVoice Surveys. Once you are a member you should take a little time to complete the remainder of the profiles in the system. There are a total of 6 surveys. The first, the Personal Profile is completed when you sign up. The other 5 profiles include an Employment Profile, a Basic Profile, an Auto Profile, a Travel & Leisure Profile, and a Health & Wellness Profile. Completing these helps ClearVoice Surveys get to know you and assists in allowing them to provide you with the most appropriate surveys.

ClearVoice Surveys allows members to earn rewards for the surveys they complete. The amount that is earned varies from survey to survey based on a variety of factors including the type of survey and the length of time it takes to complete the survey.

CLEAR VOICE SURVEYS
"Surveys"
November 15, 2016 by Jason from US
Has interesting and informative surveys that are really easy to fill out.

CLEAR VOICE SURVEYS
"Good Site"
November 14, 2016 by kelly from US
I have been a member for several years. I like that you can request payouts for cash. You can cash out at 10$ through Payoneer. I would have given a better rating except that there are not enough survey opportunities. .

CLEAR VOICE SURVEYS
"I seldom qualify "
October 4, 2016 by Lynn from US
Though the surveys pay well, I seldom qualify even though I respond to the invites. Also, I feel the qualifying surveys are too long.

CLEAR VOICE SURVEYS
"ClearVoice Surveys Review"
October 4, 2016 by Harren from US
Around the time I started taking surveys, I discovered ClearVoice. I was immediately marveled by how accessible the site was, from the invitations I get to the compensation for the surveys I take, whether I complete them or not. I thought I had discovered the heaven of survey-taking... then stuff happened, and I don't hold it to the same regards i do any more.

Simply put, ClearVoice Surveys is a site where various survey providers distribute their surveys through them. You're compensated whether or not you complete them, and given the compensation given, as well as the rewards offered, this survey site was once one of the best sites you could join to take surveys from.

Reasons why ClearVoice would be recommended:

1. High frequency of surveys: ClearVoice has no shortage of surveys you can take. Just like other survey sites, ensure they're taken as soon as possible if you want to qualify for them.

3. Award Threshold: A minimum of $10 is needed to redeem rewards. When the site's taken for a spin, you'll see just how easy it it to reach that threshold.

Reasons why I wouldn't recommend ClearVoice:

1. Site doesn't work too properly: The ClearVoice website itself doesn't work too well; one glaring flaw is your inability to change phone numbers after registration, and sometimes you may have to sign in twice.

ClearVoice has changed quite dramatically since the last time I knew it, and as a result, it's not a site I'll too readily recommend. Which is why I'll throw in two other survey sites that work just as well as ClearVoice: ClixSense Research and Speak Up Surveys. Both work the same as ClearVoice, and offer the same rewards at the same reward thresholds. Moreover, they're different websites, meaning the same number can be used only once for each of them.

CLEAR VOICE SURVEYS
"Limited Survey Opportunities"
October 3, 2016 by Heidi from US
This survey site has few surveys and in addition, it's difficult to "qualify" for surveys that you can take. I've been a member for over 6 years and have earned under $150 in total. Rewards are paid in Amazon $'s starting at the $10 level. It takes a long time for your account to be credited for surveys taken. I don't recommend this panel.

CLEAR VOICE SURVEYS
"Decent, but there are better sites"
October 2, 2016 by David from US
I have earned some money, but most of the surveys I attempt, I don't qualify for...and that is before answering any questions. I just click the link in the email invites and it says I didn't qualify.